Does AP have any view on the use of "space" in business stories? It seems to be used increasingly in contexts where "sector" may have previously been used. For example, "Goldman Sachs is one of the largest companies in the investment banking space."

We think it sounds jargony, but we're not taking an official stand.

You can condense it sometimes. But watch for confusion. In your example, even though you used the plural departments, it still could seem in a quick read that Health and Environmental Quality is one department. Better to use more words if necessary to avoid such potential confusion.

In referencing the Super Bowl, should it be "the big game," "the Big Game," or "The Big Game"? My company wants to use the last one.

We just call it the Super Bowl ...

What is the rule for using periods in medical credentials that follow a name?  If there are written guidelines, please direct me to those. I would love to have them on-hand when I come across some of these examples: CRNA, APRN, PA, PhD, CNA, MBBS.

We don't use most of those abbreviations, so we don't have a style for them. You can develop a house style.

is it daunting academically and socially?

The second version is better.

I'm not really following the question. Examples would help. Perhaps this guidance is relevant.

Please explain the proper use of the preposition "at" versus "in" when referring to location.

There are so many intricacies that it's hard to sum up. If you have specific examples, I could weigh in.

Question from Williamsport, Pennsylvania, on Feb. 3, 2023

Is it nature lovers or nature-lovers?

As a very longtime reader of the Stylebook, which I note is now too-cool-for-school to call itself “The” AP Stylebook, and as a subscriber paying $29 a year for the past several years, I’m aware of your existing advice on that point, which mentions it as a modifying locution. That wasn’t what I asked.

And if it was read for TV, should there be a difference?

To use a different example specific to your question: The Fed hiked its benchmark rate 0.5 percentage point.

We don't have specific guidance on reading for TV, but there are many cases when broadcast writers use a variation for copy that is read aloud. Something like: The Fed hiked its benchmark rate half a percentage point.

I'm writing about the Congressional Caucus on the Deadliest Cancers. After the first reference, should I refer to it as "the Caucus" or "the caucus"? Thank you.

In our style, the caucus on later references.

A quick question from a longtime fan: How is lunchmeat/lunch meat spelled? Webster's says it's one word, but in this AP entry for bologna, it's spelled as two words: Associated Press Stylebook (apstylebook.com).

We'll stick with two words. Sometimes we differ from Webster's New World College Dictionary. This is one of those times. But, we do like meatloaf as one word. Gofigure.

When covering Native American topics, are there any instances where Tribal (vs tribal) should be used as a standalone proper adjective?  For example, "John Doe is a Tribal member of the Cherokee Nation." Or, "Jane Doe is a Tribal elder."

Also, should Tribe or Nation (vs tribe or nation) be used as a standalone proper noun when referring to a specific tribal government on second reference?

We don't capitalize tribal. (In your first example, why use word at all, as opposed to simply ... a member of the Cherokee Nation.)

On later references, we lowercase tribe and nation.

Here's one of the relevant sections of the race-related coverage entry:


tribe Refers to a sovereign political entity, communities sharing a common ancestry, culture or language, and a social group of linked families who may be part of an ethnic group. Capitalize the word tribe when part of a formal name of sovereign political entities, or communities sharing a common ancestry, culture or language. Identify tribes by the political identity specified by the tribe, nation or community: the Apache Tribe of Oklahoma, the Cherokee Nation. The term ethnic group is preferred when referring to ethnicity or ethnic violence.

Yes, with the hyphens.

Also, I believe skills should always be plural in the term skills gap. Is that correct?

Can you please advise?
Thanks!

Either is fine in your two examples. And I agree on skills gap.

What's your policy on referring to an athlete as the GOAT? All-caps, no periods seems common elsewhere (and with periods -- G.O.A.T. -- looks super weird). Does it need to be explained in the context of a sports story?

Can we get an official ruling from the GOAT of style guides? ;-) Thanks!

AP sports stories use GOAT, all-caps with no periods. We generally define the term but not always. Here are a couple of examples:

Already considered the GOAT — greatest of all time — Brady finally walked away from the NFL on Wednesday following the most difficult, emotionally draining season in his life.

In a story about Messi: Competition is fierce when it comes to determining the greatest of all time, or the GOAT, as it has come to be known. It can come down to the smallest of margins that separate players of such brilliance.

The term GOAT has been known to show up in AP sports headlines, without an explanation immediately attached. Usually it's in the story but sometimes not.

We do love being the GOAT of style guides!

Question from Washington, District of Columbia, on Feb. 2, 2023

Even though you say nonproliferation should not be hyphenated, you hyphenate the NPT:

Global agreement intended to limit the spread of nuclear weapons. It provides civilian nuclear trade in exchange for a pledge from nations not to pursue nuclear weapons and for the United States and other nuclear weapons states to negotiate their nuclear disarmament.

Webster's New World College Dictionary uses no hyphen. The AP Stylebook doesn't have an entry, though an Ask the Editor response in 2016 said we defer to the dictionary on that one.

I can't speak to the thinking of the editors in 2008 who use the hyphen for the treaty. I suspect it was the predominant use.

When referring to second-generation Japanese Americans, specifically those who fought during World War II, which is preferred, nisei or Nisei? Webster's New World lists lowercase first, but it seems like uppercase would be more aligned with AP guidance on terms used in an ethnic sense.

I agree that uppercase is in keeping with our overall style guidance.

AP favors no hyphen in "coworking," although it hyphenates "co-worker." Does AP have a hyphen preference for co-living, co-housing or (encountered recently) co-warehousing? At some point, when a word gets too long, do you favor a hyphen simply for clarity?

We don't have a preference but I'd say use the hyphen, and definitely explain it. Or, better yet, avoid it and use more words to say what you mean.

When describing people becoming U.S. Citizens, is citizenship earned, obtained, acquired, something else, or no preference.  e.g. The Bolivian-born [Jose] ________ed his U.S. citizenship in 2018.    Want to be respectful and not sure if there's a preference in style.

Typically it's ... was granted citizenship or the person became a U.S. citizen. Lowercase citizen.

Ask the Editor said to lowercase Ethernet. But in half a dozen major newspapers, and every other style book, it's upper cased. What is AP's rationale for lower casing?

Would margherita be capitalized when referring to the pizza? I don't know if she's as exalted as Alfredo and his fetuccine. I've also seen it referred to as "pizza margherita" rather than a margherita pizza.

Yes, capitalize Margherita. We don't have a preference on order of the words.

Hi AP. Does the word "criteria" take on a singular or plural verb? The sentence in question is:
In addition to these basic criteria, it is important to understand the wide diversity of wetlands.

I wasn't sure if this is correct or if AP would recommend this be changed to read: "In addition to this basic criteria ..."

Criteria is the plural of criterion. We'd use the plural verb. Note this from Webster's New World College Dictionary: "the use of criteria as a singular form is becoming more widespread, but is still objected to by many."

You don't put periods in three-letter abbreviations. Does this apply to abbreviations of more than three letters, such as CLEAN?

Since this spells an unrelated word, we'd use periods. You can choose otherwise. Here's the guidance from the abbreviations and acronyms entry.


CAPS, PERIODS: Use capital letters and periods according to the listings in this book. For words not in this book, use the first-listed abbreviation in Webster’s New World College Dictionary. Generally, omit periods in acronyms unless the result would spell an unrelated word. But use periods in most two-letter abbreviations: U.S., U.N., U.K., B.A., B.C. (AP, a trademark, is an exception. Also, no periods in GI, ID and EU, among others.) In headlines, do not use periods in abbreviations, unless required for clarity.
Use all caps, but no periods, in longer abbreviations when the individual letters are pronounced: ABC, CIA, FBI.
Use only an initial cap and then lowercase for abbreviations and acronyms of more than five letters, unless listed otherwise in this Stylebook or Webster’s New World College Dictionary.

Our style is 5 million.

Comprehensive AP style guidance on your computer, tablet and phone 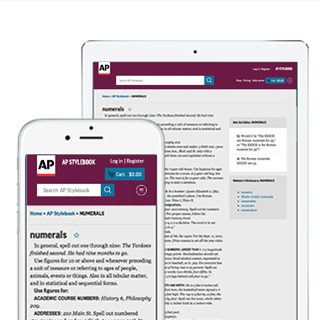 Your subscription includes the popular Ask the Editor feature, where you can ask your own questions and search thousands of past answers, and Topical Guides, offering guidance to help you write about events in the news.

Keep up to date on style news. Sign up for our stylish monthly e-newsletter by submitting your email address below.

Try AP Stylebook Online for yourself

We will include access to Webster's New World College Dictionary, the official dictionary of the AP Stylebook.

At the end of your free trial, we will ask you if you would like to continue your service so you can keep any of the custom entries you created on Stylebook Online.